Dalmatians or (Dalmatiner) are known to be one of the best watchdogs and fire-escape hunters since time immemorial. They are known to be famous for their mysterious black spots on their velvety-smooth white fur skin. Making them one of the most easily recognizable dogs of the world.

Known as one of the most entertaining yet energetic dogs, Dalmatians tend to be hyper active more or less all the time and because of which they are generally used in the circus extensively as well as they act like one of the better playmates for young children at home.

Dalmatians have a huge mystical arena around them when one tries to investigate into those black spots as well as when it comes to talk about their origins. They are known to be friendly yet ferocious and thus the whole personality of the Dalmatian breed makes them one of the most fascinating canines throughout the world.

Origins of Dalmatians
Dalmatians are one of those breeds whose origins are even now to the present day unknown because of which the curiosity is developed around them most of the times. Originally, these dogs are known to come with the nomadic bands of Rome who are now knows as gypsies to us. Although it is still a façade that they were found there. They are known to have adopted their name from the eastern shore of Adriatic Sea which is now known as Croatia to us. The Republic of Croatia was accepted by the F.C.I to be the county original of these Dalmatians. Since the 18thcentury this breed was massively cultivated in the backdrop of England and their unusual coatings and markings seemed to become popular in Europe during the latter half of the 19th century. But even this theory on these Dalmatians being from Croatia has been debated over the years because the country is yet to call these breeds a product of their territory and thus many theories of these dogs being from Asia(as the Bengal dog) and from Africa have been lurking since their very existence.

It is believed that this breed has been related to the Pointer and because of their stamina they are known to be greatly affiliated to having very pleasant and sharp searching abilities with themselves.

Dalmatians as Mascots
It has still not yet been absolute whether it was for what purpose this breed was used for but at the outset it was believed that Dalmatians were utilized for the work of being a carriage dog in the 1800’s for the gypsies. Running behind the coach or being under the coach axles being their primary job. They were guard dogs for the horses and coach when at rest. Because of their comfortable proximity with the horses and the stags; they became the guiding canines for the stags and helped out clear out their paths.it is said that during that time when a fire would be started, these Dalmatian dogs helped clear out the way for the horses in order to make way for the horses to reach the place caught with fire on time and even helped rescue people in dire need of help during the fire to escape.
They would then direct the horse’s way back to the stations and would carry out the responsibility of being a watch dog. Because there was a heavy possibility of thievery being carried out in those local areas of the fire engines and hoses, these Dalmatians would serve their purpose of being responsible watch dogs, efficiently. Even now Dalmatians are used as guard dogs for protection of eminent institutions as well as homes. Protection with this breed is guaranteed. 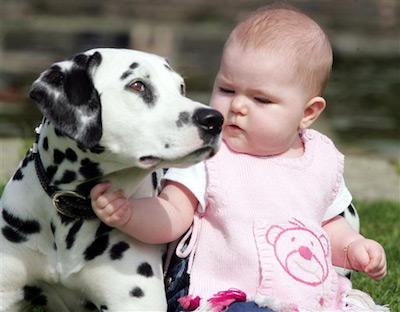 Known to be entailing very high energy with themselves, Dalmatians are known to be able to travel long distances on their limp in a day (known to cross counties within a day’s time). Thus, it is well advised to not have them stuck in the backyard for too long. They are known to have a sly sense of humour and could behave well with unknown entities if treated properly at the time of them being a puppy. They are known not to have many issues when around familiar entities and if taught well from the beginning, they are known to be adjustable enough to fit in. Dalmatians are known to fit in well with young kids and are branded playful when treated with toys, food etc. being very smart in nature, it knows how to entertain everyone from every age group, well and could be the perfect watchdog for your house.

The Mystery behind the SPOTS
Whenever we see the infamous movie 101 Dalmatians, we all at one point had wondered “where do these spots come from?”

Dalmatians being the only canines having such spots that ranges from their whole body (they even have spots in their mouth) makes them a unique animal to have. Believe it or not, the reason for their spots is still unknown. Some believe that the spots on these Dalmatians come about because of selective breeding that caused the liver-color spots on them. Whereas, some say the spots arrived due to the genetic mutations on the skin of these dogs, called the PIEBALD GENE which bring about these spots.

It is said that these spots do not come out only in the black color- there are Dalmatians with blue, light green and lemon colored spots as well. They might not even have any spots at all! Dalmatians are even known to have variance in their eye colors- having amber or blue eyes.

Pre-requisites before buying a Dalmatian
Need to be taken for daily long and brisk walks, allowing for them to walk behind so as to instil in them the feeling of being lead, or else they could turn out to be the leaders and be aggressive in future.

About 30% of every Dalmatians are deaf, and must go through the BAER test for the one who wants to adopt/own them.

Have a tendency to lose a lot of hair- must be brushed at least 3-4 times a week so as to avoid losing hair on things. Must be combed regularly- make them have a bath 3-4 times in a year.

Can live up to the age of 18 years if take care of properly- have a possibility of getting health issues during their last years regarding the urinary bladder stones.

All in all, Dalmatians are worthy of being a care-taker of your house and could very well help you with guarding the family!