Your cat and arthritis

Your cat and arthritis

If you have an older, overweight, or large-breed kitty, please read on. In fact, if you have a cat of any age, weight, and size, you should take the time to become familiarized with a topic that's too often ignored in cats: osteoarthritis.
Osteoarthritis (aka “arthritis”) may be slowing your cat down or worse. In some cases, it may even be the one thing that leads your kitty down a row of collapsing healthcare dominoes, speeding her demise faster than almost any other process she may be suffering.
Most cat owners haven't been properly educated on the role of arthritis in their cats' lives because it doesn't tend to present in an obvious manner, as with dogs. In addition, veterinarians don't tend to discuss it with as much vigor as they do for dogs and cat owners tend to dismiss the telltale signs as simple aging.
Arthritis is much more common than conventional feline wisdom would have you believe – especially in the aged and the overweight. So now that our cats are living longer and feline obesity is on the rise, it makes sense that we'd be talking more about this disease.

Overview of Arthritis in Cats 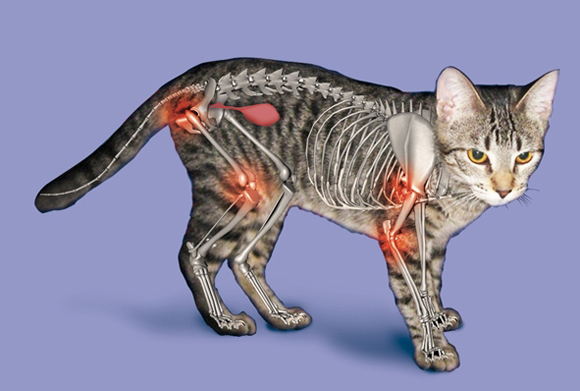 Osteoarthritis is a disease that affects the joints, usually after a lifetime's worth of wear and tear. With all the jumping and scampering our healthy housecats do, it's no wonder vets see a lot of arthritis blooming as they reach their sunset years.
But because cats are marvels at hiding their pain, and because limping and struggling to rise are not common (as we see in people and dogs, for example), arthritis may easily go undetected for years in cats.

Diagnosis of Arthritis in Cats
An X-ray is the surest way to see the telltale signs of arthritis. The most common joints affected? The spine, hips, knees and elbows. These are the joints we'll typically include in our radiographs.

How do veterinarians decide it's time to talk about arthritis?
We ask: How is he moving? Is he jumping much less? Does he miss the counter when he tries to jump up? Does he walk much slower? And we observe: Is his spine hunched or stiff? Has he lost muscle along his spine and over his limbs? Is the fur on his back greasy because he can't reach to groom it? Does he resent manipulation of key joints?
Sure, it might be just “old age.” But it could be arthritis too.

So what can you do?
First, recognize when your kitty slows down. Between ages ten and fifteen is the most common time for this. Consider an X-ray right about now. If your cat is fat, even six or seven is not an unusual time to develop some arthritis. And some cats, like dogs, are genetically predisposed to arthritis.

Treatment of Arthritis in Cats
Arthritis treatment in cats is a complicated, controversial topic. That's because cats are not like people or dogs in their ability to tolerate the standard medical treatment for arthritis: non-steroidal anti-inflammatory drugs (NSAIDs).
Here are some basic guidelines for treatment of arthritis in cats:

Prevention of Arthritis in Cats
If your cat is overweight, even at age two, you're courting arthritis with the joint stress that extra weight exerts. Consider that with each additional ounce your cat weighs, any future arthritis will be compounded that much more. In fact, weight control is the most important factor in limiting arthritis in cats - apart from individual genetics, of course, over which we have no control.