Want to show your hamster at the next hamster show? Find out what the judges will be looking for in your hamster. How exactly are the hamsters at a hamster show evaluated and what does it take to be an award-winning hamster? It’s no mystery actually, and the key is in the standards.

The Exhibition Standards are a written document developed during many years to describe how an ideal animal looks and acts. The first hamster clubs were formed in 1945, and the National Hamster Council was founded in 1949. The first standards written were developed during the mid- to late 1940s. The standard specifies coat, color, markings and temperament of the hamster. When new varieties are discovered they are studied for years, and then a standard is developed describing their ideal presentation. Most hamster organizations in the United States recognize the British Hamster Association Exhibition Standards.

So what exactly is the hamster show judge looking for in a show hamster? The standard breaks it down so it’s easy to understand. The Syrian standard, for example, consists of six categories: 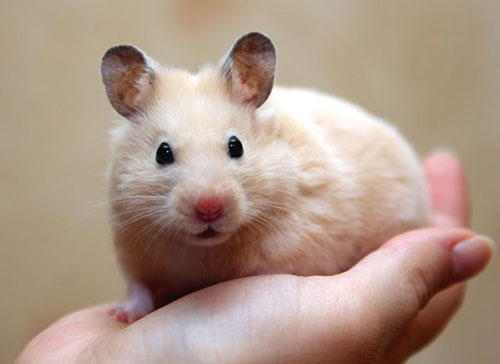 Type (25 points) — This is the hamster’s physique. The judge will be looking for a hamster that is large, cobby (short and wide) and that shows a smooth outline from its nose to its tail. The hamster should have lots of bulk for its size, and all its parts should be in proportion. Ideally the hamster’s head will appear broad and short, with a blunt muzzle.

Fur (20 points) — Density is very important, and the judge wants to see a nice, thick coat on your hamster. It should be soft to the touch, and smooth over the hamster’s body. Shorthaired hamsters have a very short coat that is even all over. Longhaired hamsters have a coat of varying lengths depending on if they are male or female, with the males having longer flowing hair. It is important that the hamster’s coat is clean, unstained and free of any mats.

Size (10 points) — Larger is always better in the case of hamsters. Size is measured in length and not in weight, so it is important that the hamster is large but not fat. No specific weight is required, but the hamster should feel heavy for its size, and dense and large-boned. Syrian females are almost always bigger than males and the judge will make allowances for this. No specific length is required, but the general rule is the larger the hamster the better.

Condition (10 points) — Health, husbandry and temperament are the keys in this category. Points are lost for rough, dirty and dull coats, staining, poor weight (either under or over), and any injuries. Judges expect all hamsters to be good pets and will deduct or eliminate a hamster for temperament issues such as biting, being aggressive, charging the judge, or acting so wild or unhappy that the judge in unable to handle it. Most judges will give the hamster the benefit of the doubt and will try gently several times. Hamsters are pets first and foremost, however, and the judge will deduct and eliminate accordingly. The standard mentions that the hamster “shall be fit, alert when well awake and tame to handle.” Otherwise, there is no set listing about temperament.

Eyes and Ears (5 points) — The hamster’s ears should be round with no tears or folds, and placed far apart on the head. Large eyes that dominate the hamster’s face are ideal.

Color and Markings (30 points) — Each color variation and pattern has a very specific separate standard written to describe its ideal. There are more than 40 standardized color, pattern and coat variations for the various species of hamsters, with many more under development. The judge evaluates these features based on how closely the hamster matches what is written and awards points accordingly.