9 sounds made by rabbits

Rabbits have long been considered “the quiet pet.” And it’s true that they aren't known for bothering the neighbors. For the most part rabbits communicate with people through their body language.

Activities such as running, leaping, and flopping over onto their sides all point to a bunny doing the happy dance, for example. However, there's a whole list of sounds that you may not have realized rabbits can make because many of them are made at a very low level.

Clucking: rabbit clucking doesn't resemble the clucking sounds of a chicken --- it's a lot quieter. However a clucking sound coming from a rabbit means that they're satisfied with what they're nibbling on.

Purring: purring for a rabbit is lot like purring for a cat in that they both mean "happy and content." But cats purr using their throat while rabbits make the sound by lightly rubbing their teeth together. It's a very soft sound, but one you’ll want to listen for.

Humming:I think that all rabbits do it on occasion, but most rabbit keepers associate it with an unaltered buck wooing his ladylove. 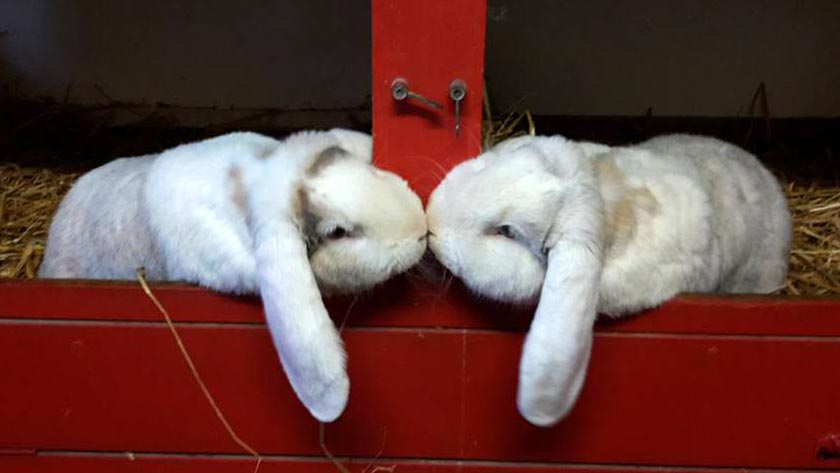 Growling: rabbit certainly can growl and it often precedes a lunge and possibly a bite. If the rabbit feels threatened (even by you), he'll have no qualms growling and lunging. Forewarned is forearmed.

Snorting:snorting can come before or along with growling.

Hiss:this sounds exactly what you think it sounds like. A hiss is used to ward off other rabbits.

Whining or whimpering:rabbits will whine or whimper if they don't want to be handled. I've most often heard this from a pregnant doe that has been put into a cage with another rabbit (especially a buck). The whimper is a protest to the environment in which they find themselves. This might include not wanting a cage-mate or in the case of a pregnant doe, they may have already been bred and aren't interested in a bucks advances.

Teeth grinding:the sound of a rabbit grinding its teeth is nearly unmistakable. It's hard to confuse it with purring even though it's made the same way. If your rabbit is grinding its teeth he's in a lot of pain and needs medical attention.

Screaming: the sound of a rabbit screaming will send chills down your spine for two reasons. First, it sounds eerily close to a terrified child. Second, rabbits only scream when a predator is chasing them down or they're dying. It's never a false alarm when a rabbit screams.

The wide variety of sounds that rabbits can make may surprise you, but the longer you're around rabbits the more likely they are to communicate with you vocally.