Corals in your tank: the info you'll need

Just about every serious marine aquarium hobbyist strives to create a miniature ocean environment, and keeping a reef is among the most popular avocations. This, though, is not a pursuit for beginners because it requires proper chemistry and a bit of passion.

It also requires commitment and thought. Many coral species are threatened by over fishing, pollution and improper tourism practices like "reef-walking." The aquarium trade bears some of the blame as well, since most of the corals you buy in stores are harvested from the sea. So, if you want to keep a coral, remember that this isn't your average aquarium responsibility.

What Are Corals?
Despite their plantlike appearance, corals are animals, or actually a community of many individuals called polyps. On average, these are no bigger than an eraser-head. Take a close look at a polyp and you'll see tentacles that reach for the sky sprouting from a trunk-like base, around which the polyp has built a calcium carbonate "home" (or corallite).

Microscopic algae called zooxanthellae live in the polyps and perform photosynthesis that provides the nutrients necessary for coral polyps to survive.

Corals require excellent water quality because they are highly sensitive to water conditions. They must have intense illumination, no nitrates, good water circulation, a high content of dissolved oxygen, a calcium supply and an occasional dose of nutritious trace elements like strontium and iodine.

Lighting
Of all the elements required by the picky coral, lighting is the most crucial. If the zooxanthellae don't get the light they need, they will not be able to perform photosynthesis, they will not survive and the coral will die without its microscopic companions.

Metal halide lighting is the most popular for reef systems because it provides the intensity that the corals require. This type of lighting does have drawbacks in that the lamps get quite hot, sometimes requiring that you install a venting system and a bigger, stronger ballast. Although reefs will also survive under several fluorescent bulbs (VHOs or Power Compacts), metal halides are preferred because they provide a more natural effect. Corals do best under them.

Bulbs should be changed at least every six months whether they seem to need it or not. They weaken with time, and you will be running yours for about 12 to 15 hours every day to keep your corals happy. Metal halides aren't that great an expense, although the set-up can be a little more costly than that of fluorescent lighting.

Feeding
Many corals don't need to be fed if their lighting is adequate because thezooxanthellae provide for them. Still, it's a good idea to give them baby brine shrimp or other particulate foods once a week or so. If you have filter feeding invertebrates, such as clams, or fish that eat plankton, such as angelfish, your corals will eat whatever you are giving the others.

Corals should be fed at night when they extend their tentacles. During the day, the tentacles are retracted into their homes while the zooxanthellae are photosynthesizing. In low lighting conditions or when it's soon time to change your bulbs, feed corals a little more often to make up for the reduced symbiont productivity.

Water Quality
Nitrates must be kept below 10 ppm at all times. This can usually be achieved only through frequent water changes – about 25 percent bi-weekly in an established system. Temperatures should remain steady - usually around the mid- to upper-70s - although find out what your coral species prefers.

Do not have a large fish load in the tank and be careful what species of angelfish you may decide to keep in the same tank. Although angelfish are a prominent feature of a reef, coral is their favorite food. 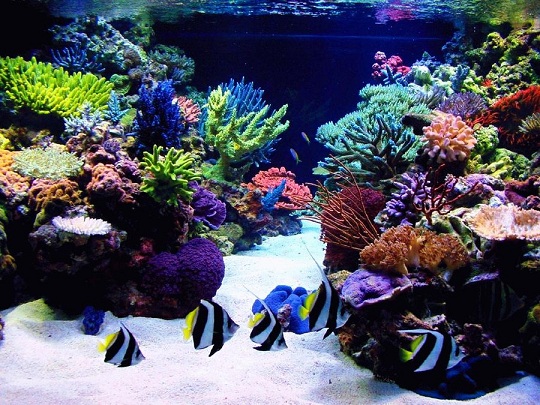 two groups: those that secrete a hard skeleton and those that do not. Most corals are colonial, though some are solitary, and several species are available.

Before you consider keeping different coral species in the same tank, make sure they won't harm each other – some are toxic to one another, an evolutionary weapon that helps them vie for space on a crowded reef.

Here's a quick survey of a few that are popular to keep and usually easy to find: