Cockroaches in North America are generally detested and even feared animals. I can certainly understand these feelings. They are interesting insects, though. Most cockroach species in the world are not pests. At least one - the Madagascar hissing cockroach - is kept as a pet. Even pest cockroaches can be useful. 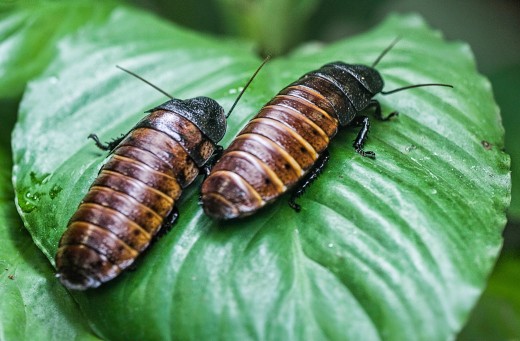 Most of the approximately 4,500 species of cockroaches on Earth live in warm and moist tropical and subtropical forests. Only a small number of cockroach are pests, but these species can be a serious nuisance and cause health problems.

Madagascar Hissing Cockroaches
The Madagascar hissing cockroach, or Gromphadorhina portentosa, is often kept as a pet. It's a large and wingless cockroach with an oval body that reaches two to four inches in length. The roach is an attractive insect with a shiny appearance. It's brown in colour and has dark red or tan patches.

The hissing cockroach is one of the many fascinating animals that live in Madagascar. In its natural habitat, the insect eats fruit and other plant parts on the forest floor and is not a pest. It's mainly nocturnal but may be seen in the day. The roaches live in colonies headed by a male, who actively defends his territory against the intrusion of other males.

Although the hissing cockroach can't fly, it has special pads on its feet that allow it to climb on a wide variety of surfaces. The pads are hooked. Anyone wanting to keep the cockroach as a pet should keep its ability to climb in mind.

Horns and Hisses
The male hissing cockroach has a pair of protuberances behind his head. These are often referred to as horns. The cockroach uses his horns to ram into another male during a fight. The female has horns too, but they are much smaller than the male's. 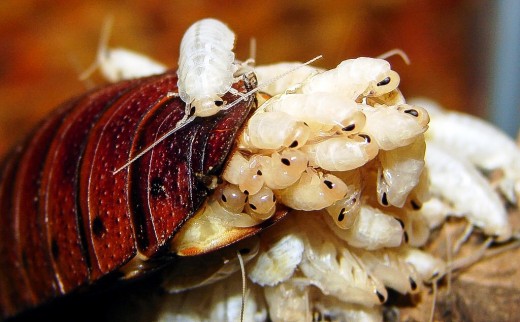 The cockroach makes a hissing sound by exhaling air through a pair of special spiracles on its abdomen. The sound is made during courtship and during interactions between males. It's also used to scare predators.

Hissing Cockroach Reproduction
The reproduction process of the hissing cockroach is unusual compared to that in North American cockroaches. The animal is ovoviparous, which means that the eggs in the ootheca hatch within the female's body. The young are then born live.

The cockroach gIves birth to thirty to sixty babies. These are white in colour and are known as nymphs. The nymphs take five to seven months to mature, molting and darkening in colour as they grow. The cockroach can live for two to five years.

Cockroaches in North America are generally detested and even feared animals. I can certainly understand these feelings. They are interesting insects, though. Most cockroach species in the world are not pests. At least one - the Madagascar hissing coc... more