Aggression in your reptile pet

Aggression in your reptile pet

Reptiles can be great pets. But some herps are more likely to bite than others, especially those with irascible personalities. For those of us who are fascinated by reptiles and amphibians, it's important that we remember that these animals are truly wild animals.

Some are captured from the wild and imported into the country for sale. Many are now being bred and reared in captivity but even those are often only a few generations from their native habitat. They aren't domesticated animals, like dogs and cats – mammals that have lived in harmony with humans for thousands of years.

Instinct Takes Over
Your reptile often reacts in response to instinct. On occasion you may perceive this as a specific action directed at you. For example, your hungry snake may strike at your hand as you reach into the cage to change the water. You might end up with hurt feelings (as well as an injured hand) because of the bite, while your snake was just striking at what he thought was a meal being delivered. It's important that you don't take an aggressive act personally but try to understand just what provoked an attack.
Aggression is often divided into several categories:

Defensive Aggression
This occurs in response to what your reptile perceives as a threat. This could be a real threat or he may be defending his territory. A shy or reclusive reptile may feel threatened when someone moves quickly around him. Some herps are prey species, meaning that they often end up as a meal for another animal; these animals are justifiably nervous about sudden movements occurring near them. In order to prevent bites, don't startle your shy herp.

Territorial Defense
Your reptile is most likely territorial. If you've ever lounged by an outdoor pool in Florida, chances are you've seen territorial displays performed by male anoles. A male encroaching on another's territory is greeted by a display involving head bobbing, push-ups and exposing the red dewlap. An amorous male will also display in a similar fashion towards females in the area. While this display is amusing to human observers, the display to another male anole is meant to threaten him and bully him to move away.

If you're courageous enough to scoop up a male that's fired up, you can expect to be bitten more readily. While a nip from a little anole isn't likely to injure anything more than your dignity, imagine the same type of territoriality when it occurs in a mature, male green iguana. Male green iguanas shouldn't be housed together, kept within sight of each other or even maintained in the same room, if at all possible. 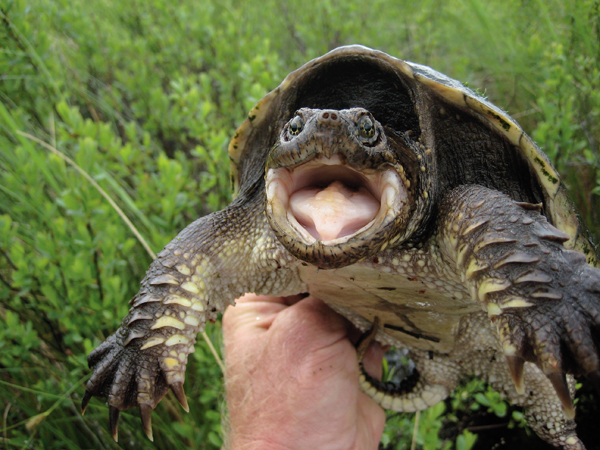 There have been many instances where a mature male, during breeding season (usually in the spring), has attacked a person entering what it perceives to be his territory. In addition to sharp teeth, a strong bite and fast reflexes, the iguana is also able to use his powerful tail as a whip. Several iguana owners have been attacked by large males. These owners needed plastic surgery to repair the bite wounds to the face!

Natural Aggression
Offensive aggression is more likely to occur among herps that are naturally pugnacious. Tegus and monitor lizards are considered more aggressive species. These lizards are hunters and, while they may occasionally become a meal for other animals, they're much more likely to defend themselves. Veiled chameleons are also considered to be more aggressive than other species of chameleons.

Venomous herps often have an attitude of near invincibility. They seem to know that they are "bad." Cobras and some venomous vipers are quick to anger and, as soon as they perceive a threat, they prepare to strike. A warmed-up Gila monster, after spending some time sunning, may be more inclined to turn and bite, rather than slink off, away from confrontation. If you've ever encountered a wild snapping turtle, you've most likely seen offensive aggression in action.

Acquired Aggression
Acquired aggression is the last form and it may occur at the onset of sexual maturity. It's also seen during breeding season, among healthy adults. Large, adult male pythons become very restless during breeding season and have the ability to become very dangerous adversaries, striking and coiling around an unsuspecting keeper if given half a chance. It's important that you stay very focused when working with and feeding mature pythons and other species of snakes to prevent severe injury.

Isolation May Be the Key
Many mature herps should be kept isolated from each other, out of sight of conspecifics. They also shouldn't be allowed to view themselves in mirrors, which can provoke a display. To prevent painful bites, you should be wary about handling herps when they're basking and their body temperature is at its warmest. 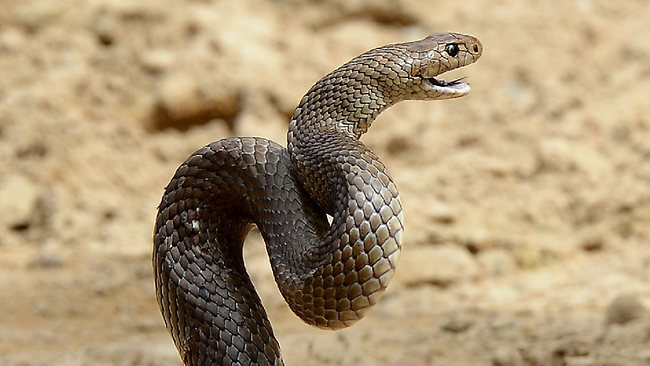 If you follow the advice here and use due caution and common sense, the chances are you will never discover how painful a bite from a herp can be. However, accidents do happen; if you should suffer from a bite from any herp, you should seek professional medical care. Many snakes and lizards carry potentially dangerous bacteria in the mouth area and teeth can cause deep puncture wounds, driving organisms deep into your tissues.

Immediately after a bite, wash the wound with povidone iodine soap or another antibacterial soap for at least 10 minutes, with hot running water. Douse the wound with hydrogen peroxide and then call your health-care professional. Often, a physician will prescribe antibiotics to prevent serious infection.

If your pet reptile bites you, don't strike or try to discipline him. He simply won't understand and will become more fearful or more aggressive as a result. Try to ascertain why he bit you: Was he hungry? Scared? Defending his territory? In breeding mode? Try not to take it personally; after all, he was probably only doing what comes naturally!