The right way to handle your amphibian

The first question to ask yourself when handling your amphibian is "Is this action necessary?" Amphibians, with their permeable skin, are much more sensitive to touch than the scaly-skinned reptiles.

The skin affords little protection against dessication (drying) or against heat. The amphibian's thin skin absorbs oxygen from the atmosphere, but the skin can also absorb anything else that it comes into contact with. If you have perfume, insecticide, hand lotion, or even soap residue on your hands and you handle an amphibian, the frog or salamander will absorb whatever is on your skin, perhaps with fatal results.

There is also the temperature differential to consider. Compared to the ambient temperature of a salamander or frog, your hands are hot. The heat from your clean hands (and the stress of being handled) can actually cause the death of a tiny frog or toad. But there are several ways to handle your amphibian with a minimum of emotional and physical stress.

Use a Small Dip Net

One way is to use a small dip net, the rectangular kind sold as aquarium nets in pet stores. Dampen the net, and shoo the animal into the net. Cover the opening with your other hand and turn the net so the mouth is uppermost. You can then empty the net into a clean holding receptacle while you clean the animal's cage. This technique also works if you shoo the animal into one of the larger, quart-sized deli cups and replace the lid. Be careful not to catch the animal's toes. And in the case of a salamander, be certain not to catch the tip of his tail in the lid when you close it.

This sort of moving-without-touching the amphibian is admirably suited for those few species that bite. Perhaps the most notorious is the horned or Pac-man frog, Certophrys sp., which not only has jaws strong enough to kill a mouse but has a pair of bony processes in the roof of his mouth to held keep prey items in place. A bite from a horned frog hurts. Spare yourself (and the frog) by not handling the frog directly.

Scoop Him Up In Your Moist Hands
Another way to handle your amphibian is to moisten your hands and scoop the animal up in your hands and restrain him gently. If the animal is small enough, like a tiger salamander, you can hold him in your hand by pinning one of his legs between your thumb and one of your fingers. Although it may seem mean to "trap" an animal that way, the amphibian stays cool. Being grasped in your hot hand may not be comfortable. If you're handling a larger amphibian, like a giant toad, you'll probably need both hands to restrain the animal. 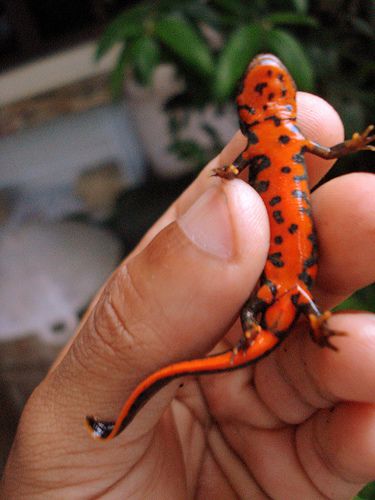 One thing you want to be careful of is the hazard of rubbing off the amphibian's protective coating of mucous on the skin. This mucous provides anti-bacterial and anti-fungal protection to the amphibian, and the animal needs to retain this protection.

Beware Amphibian Skin Toxicity
Another point to consider before you pick up an amphibian is his own skin toxicity. Some, like giant toads, can exude a powerful toxin from their skin and parotoid glands, those kidney-bean-shaped lumps just behind and beneath the eyes. This toxin has been fatal to unwary dogs and cats that have grabbed the toad in their mouth.

Generally speaking, this toxin is only a problem to humans if you handle the toad (or Cuban tree frog) and then touch your own lips, nose or eyes. Your first reaction will be a strong burning sensation, followed by a copious and prolonged watering of the nose or eyes. This is an uncomfortable way to spend the next six hours. Sometimes this toxin is gummy in texture and almost impossible to remove from your own skin, except by prolonged rubbing.