The RKF - The Russian Kynological Federation

The RKF - The Russian Kynological Federation

The RKF nowadays is one of the largest FCI-members, and it has been well known for the top results in many breeds as well as the highly experienced and educated judges & breeders.  Native breeds cultivated over centuries in Russia like Borzoi or different Laikas were always of a top quality or in conformation either working abilities because of our forerunners deep knowledge and natural talent. Next breeder’s generations which inherited those experience and abilities produced same quality Borzois and later on Caucasian & Central Asia & South Russian Shepherds. 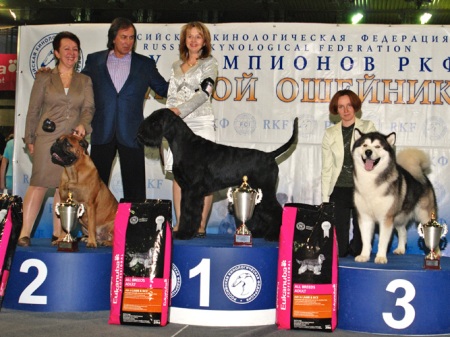 Over the years, the RKF has transformed into a powerful organization, became a full FCI member (2003), leading in the world by quantity of the awarded International Champions titles and the number of clubs,  and being the second FCI country in the number of CACIB and CAC dog shows.

Having joined the FCI Russian dog-lovers constantly take very active part in all important FCI-events including World & European Dog Shows. And the index of their activity is increasing according to statistics. The RKF – CACIB&CAC-level Dog Shows are very popular in Russia. “Eurasia” dog show with more than 12000 entries at present time is thought to be the most famous one.

There are over 7 million dogs of different  purebred dogs in the RKF database.

Lots of domestic and foreign breeds cultivating in the RKF system are at the top level.

Russian dogs have been included in the final placement in determining the BIS dogs at the most prestigious shows as well as the European and World shows and even won the titles.

The Kennel Club of the UK