Get fennec foxy to your home!

You must have come across these doe-eyes astoundingly gorgeous creatures in magazines, and wanted to own one of them. To be honest, the first time I laid my hands on such a picture, the first thought that came to my mind was, “ Are these real?” They looked for different from any animal I had ever seen that it had never struck my mind that you can keep one of these as your pet. 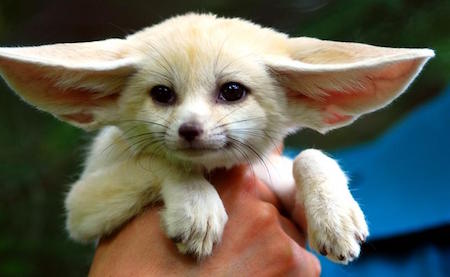 Well, now you can! Exotic though they are, they can be adopted, or rather purchased, to be exact.First things first, I must acquaint you with these strangely mythical creatures which, now that I know, actually do exist. They are called Fennec Foxes, more commonly known by the name of the ‘desert fox’. They, like dogs, are a small member of the canine family. Like dogs, they share a lot of behavioral characteristics, but since they are rarely domesticated, require cautious socialization as well as necessary precautions against escape. Now, do not be intimated about keeping a pet whose sole purpose might seem to run loose because, frankly speaking, this is not the case more often than not. Belonging to the canine family, fennec foxes, once tamed, are rewarding and more importantly, loyal.

Fennec Foxes, save for their beautiful over-sixed ears, are petite. An adult weighs about two to four pounds. One of its striking features is the soft, thick coat that is reddish and tawny on the back, and whitish on the underside. They also have some curious black markings on the back and tail.

Fennec Foxes are astute creatures. Quick and agile, they have a high pitched yelp like puppies, and are extremely cautious creatures. They are nocturnal in the wilderness, but can be adopted to the human timings if brought home at an early age. The fact that they are, like cats, extremely clean animals, and can be litter trained, if adopted at an early age. The age is an important issue when Fennec Foxes are concerned, and more often than not, owners find it difficult to tame the animal if not adopted at a very early age.

Fennec foxes are omnivores in the wilderness, their diet including s wide range of insects, rodents, plants, fruits and also reptiles. However, it is advisable to feed it, when adopted, what-you-call a commercially wild candid diet, which will be available in pet shops where they house exotic pets. However, taking into account the fact that these are exotic animals and you might not come across any such pet shops in your area, I would advise you to provide your pet fennec with a healthy mix of dog food, cat food, fruits and vegetables. One in a blue moon, you might also want to treat your pet with an assortment of raw meat, vegetables, and necessary vitamins.

Playtime for a Fennec is nonpareil. Like Labradors, they are hyperactive and need an outlet for their energy. Like small kittens or puppies or who-am-I-kidding even babies, they are extremely inquisitive and will get into probing anything and everything.  In fact, your fancy pet can be also act like a pig at times. Do not be alarmed; I meant that Fennec foxes have quite a penchant for digging. For that matter, you must devise the outdoor enclosure cautiously to prevent them from digging under or climbing over the fence (if you were planning on a fence, that is), and trust me, they can do this gamely. The best thing to do is to bury a significant portion of the fence and turning the fence in at the top or even completely casing the enclosure to avert escape. 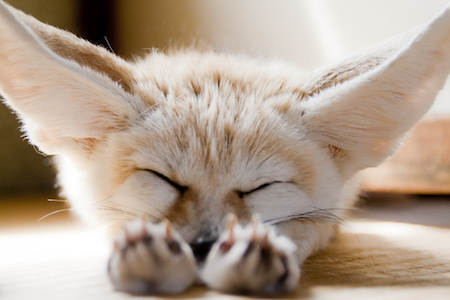 You might want to teach them to fetch like dogs, which will help them burn off the excess energy.  However, if you are intending to play fetch with your fennec pal, do not forget to leash him or her since they are exceptionally agile, and if they once do escape, it would be extremely knotty to recapture them. However, if you can, and I hope you will, establish a close bond with your fancy big-ears, it might just stop it from trying to escape.

Weather or rather temperature is not an issue with Fennec foxes provided they are sheltered adequately. It is true that keeping a Fennec fox will cost you quite a handful. However, if you consider the fact that they are a curious assortment of all the animals you’ve ever wanted as a pet, then I do believe that it is really worth it. To adduce this fact, let me make you aware of another Fennec characteristic  that is rather croc-like: One of the favourite activities of a Fennec fox is basking in the sun!

Well, considering all the pros and cons, and of course the astoundingly cute face, I believe that if you do intend to get one or a pair of these as pets, it would be a rather rewarding experience. Almost similar to dogs in certain character traits, Fennec foxes, especially the hand-raise pups, are generally compliant and do not resort to biting unless cornered or threatened. They are generally not apprehensive about strangers, and are quite friendly to everybody. One in a while, they might irritate your other pets but, trust me, this is because the Fennec expects them to play with him, all the time!