How to handle your pet snake correctly

How to handle your pet snake correctly

How snakes are handled will depend upon the kind of snake and its individual temperament. Some snakes can be lifted by hand from the outset with no display of temper at all. Some may be irascible when first encountered but will quiet as they become used to routines. Others may bite persistently and be so unpleasant that they must be moved with a snakehook or a clampstick. 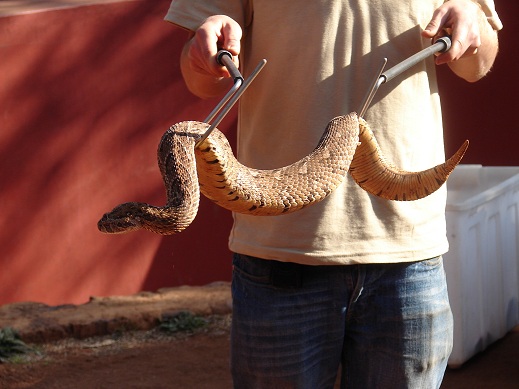 Traditionally snakes have been placed in three categories: harmless (non-venomous), rear-fanged (mildly-venomous) and front-fanged (venomous). While these designations may seem definitive, they can, in fact, be verymisleading. It is now known that among the so-called harmless snakes are some species that produce toxic saliva. Human fatalities have been attributed, for example, to bites from some relatives of the garter and water snakes. Additionally, many non-venomous species are powerful constrictors. A few of these are large enough to be life-threatening to humans.

Among the ranks of the "mildly-venomous" rear-fanged snakes, there are also a few species that have caused human fatalities. The bites of others have caused massive swelling and tissue destruction. The venomous species – vipers, cobra allies and sea snakes – are aptly designated and a bite should be assiduously avoided.

With all of this potential for danger, how does one go about handling a captive snake? Simply put, the answer is carefully. Since snakes usually advertise their intent with a display of body language (coiling, flattening, drawing back into an "S" to facilitate a strike), it will behoove you to learn their habits, their silent language (as a species and as an individual) and to tailor your methods of approach and handling safely.

Unlike many other reptiles and amphibians that resist owner familiarity, many snakes can be safely and frequently handled if this is done gently. If you are new to the snake-keeping hobby, discuss the habits of the species you are keeping with other hobbyists and with employees in the dealerships that offer them. Read as much as you can about the species that most interest you. Here are some suggestions that may help: 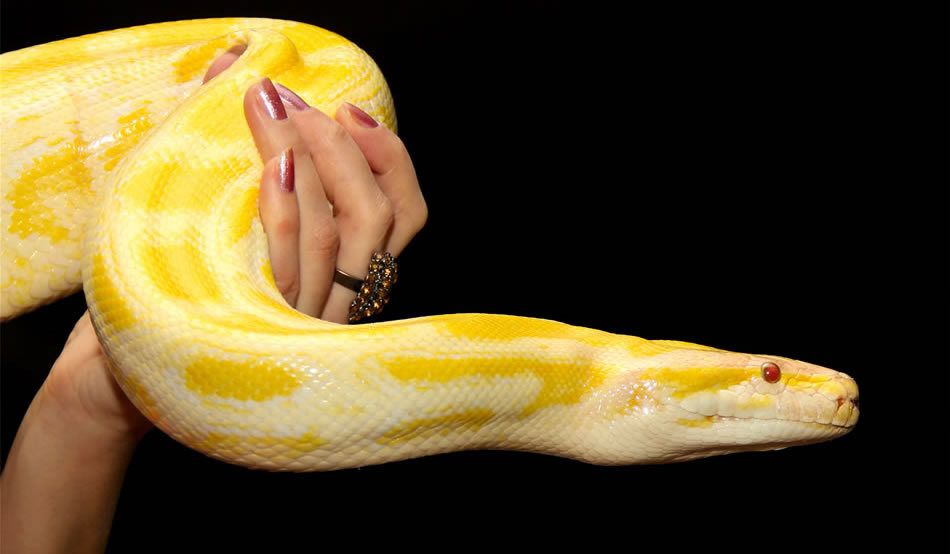 Snakes That Are Easily Handled
The more laid back species of the truly non-toxic types that attain only moderate size are the most easily handled. Among these are most species of the eastern kingsnake, many of the American rat snakes and small- to medium-sized boas and pythons.

Although some of these snakes may initially be feisty, they soon become accustomed to handling. Those that show reluctance at allowing themselves to be lifted by hand will generally be entirely tractable if they are first lifted with a hook then placed in your free hand.

Some snakes, such as the milk snake, may not bite all of the time, but may squirm, forcefully wriggle and smear feces on their captor. Hold these carefully but tightly with one hand and try to control the wriggling end with your free hand.

Snakes That Aren't Easily Handled
Other non-venomous species, such as racers and whipsnakes, some of the Asiatic rat snakes and a few slender pythons, such as the water and Macklot's pythons, may remain untrustworthy throughout their lives.

Many of these snakes do not "hook" well (repeatedly sliding off of the hook rather than balancing quietly on it) and may repeatedly bite the hand that restrains them. Wear a glove, but take care that the snakes do not break teeth off in the glove. Broken teeth may lead to infectious stomatitis (mouthrot), an insidious and potentially fatal disease.

The Constrictors
Several giant constricting snakes are common in the pet trade. These are the green anacondas, common boas, Burmese pythons, reticulated pythons and African rock pythons. Except for the boa, which seldom exceeds 10 or 11 feet in length, all of these species have the potential for attaining or exceeding 15 feet long. Most of these are purchased when they are two feet or less in length, and over time most become quite tame. Accustomed to caring for them regularly, their owners tend to forget that these top-of-the-line predators lack a great deal of reasoning power, and when adult can, in a split second, become a lethal adversary.

Besides constricting, these snakes can also bite strongly. We do not consider any of these but the boa suitable pet trade species, and it only under certain specific conditions. Because of the tremendous constricting power and lethal potential of these snakes, specimens of eight or more feet in length should only be cared for when two or more people are present. Children are at even more of a disadvantage than adults. Unless continuously supervised, they shouldnever be allowed near a giant snake that is more than four or five feet in length.
If grasped by any constricting snake, be it 12 inches or 12 feet long, begin your escape efforts at the snake's tail. Grasping the tail firmly, begin unwinding the snake. Expect to need help if the snake is eight feet or greater in length. They are immensely strong reptiles. When finally getting to the mouth, disengage the teeth as gently as possible (usually not your ultimate concern if you're the one being constricted and the snake is large!) Again, we admonish - no matter how tame the snake - if it is eight feet or greater in length, have at least one buddy with you when working with the reptile.

Venomous Snakes
Rear-fanged (ectoglyphic) and venomous snakes of many kinds are readily available in the American pet trade. Although many seem reluctant to bite, discretion should always be used when handling rear-fanged snakes. A full bite from any large ectoglyphic snake should be cause for concern. Always use a snake hook or clampstick to move these animals, and do so when the species is least active and most approachable. They should be moved only to clean their cages. The snake is lifted on the hook or clamp and placed in a safely covered container while its cage is worked on. The snake is not pinned and manually grasped. To do this is to virtually ask to be bitten! 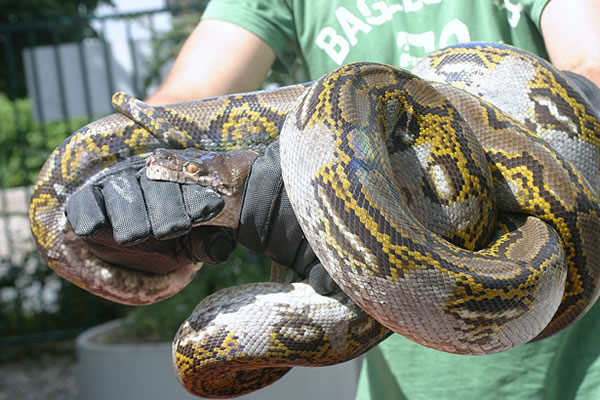 The keeping of venomous snakes is illegal in some communities. If you have decided to keep a venomous species, know the closest sources of antivenin and the most knowledgeable doctors. Always use a snake hook or clampstick to move these animals, and do so when the species is least active and most approachable.