Ball pythons (Python regius) are great snakes for a beginner snake owner. They grow to an average size of 3-5 feet, which makes them an ideal size and easy to handle. They are also beautiful, shy, calm and docile. In the U.S., they are called ball pythons because 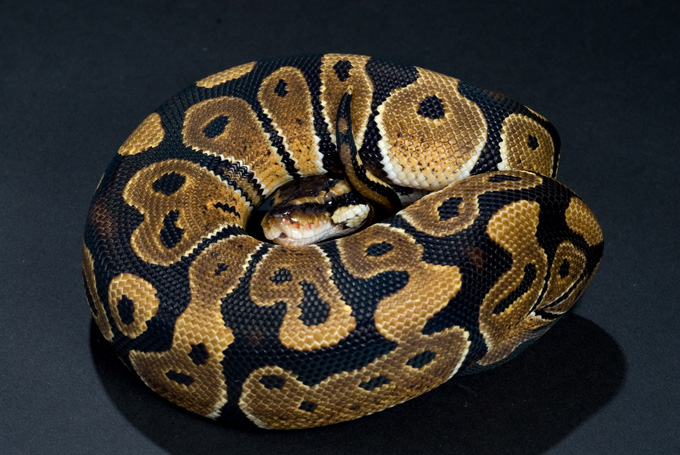 they roll into a ball and tuck their heads in the center when frightened. Over in Europe and many other countries, they are known as royals because Egyptian royalty used to keep ball pythons as pets and often wore them wrapped around their wrists. A pet ball python is a joy to own and flourishes when given proper care. They usually live between 20–30 years, although they are known to live even longer. They grow about a foot a year for 3 years, and then their growth slows down significantly. They are nocturnal, which means they hunt rodents at night, although ball pythons in captivity will easily learn to eat during the day.

Why Buy From a Breeder?
Ball pythons have a reputation for refusing food, but that’s much more common in wild caught specimens. In addition, wild caught snakes tend to be very stressed from capture and transport, often harboring a large parasite load such as worms, mites, and ticks. Captive-bred snakes tend to be slightly more expensive, but they are well worth the extra cost. They will tame down and adjust quicker to their new home, and will already be eating regularly. A breeder will also have ball pythons in all different types of exciting colors & patterns, which are called morphs. Most ball pythons sold at large chain pet stores are imported from Africa. You can find healthy, local, quality captive bred snakes at a reptile expo or an exotic animal store. If you are already experienced with other types of snakes, you may even want to consider choosing to adopt a ball python from an animal rescue.

What to Look For When Choosing
Choose a snake that has a well-rounded muscular body, clear clean eyes and vent, and one that shows no signs of respiratory problems (wheezing, bubbles around nostrils). Look for one that is alert, curious and gently grips your hand/arms when handled. They may be skittish and timid at first, but should calm after handling for a bit. It is not a bad idea to ask for a feeding demonstration to be sure the snake readily takes a meal. The skin should be somewhat shiny, rubbery feeling, and shed free.

Bringing Your New Pet Home
If you already have another reptile at home, the new snake needs to be quarantined due to the risk of parasites and disease. Three to six months quarantine in a separate room with separate equipment from the other pet is ideal. In addition, an initial checkup with a vet is in order, especially for internal (take a recent stool sample with you in a bag) and external parasites. ContractingSalmonella bacteria is an extremely low risk as long as good hygiene is practiced.