Aggression in birds can be an unexpected, frustrating and always unwelcome behavior. Understanding why it occurs and what you can do to help can result in a more loving and safe relationship with your bird.
Birds are normally flock creatures. In the wild, they are part of a tight flock that provides constant companionship, leadership and guidance. Birds prefer to live in a hierarchal community, where one flock member is dominant over others within the group.

In addition to hierarchy, birds thrive on routine. Birds left alone for long periods of time or those whose owners keep erratic schedules can develop behavior problems. When left alone, birds must have some form of stimulant activity available such as chew toys, swings and perches. A radio or television left on is also helpful. Depending on the species, when the owner returns home, freedom from the cage may be necessary.
Parrots are the most common species associated with dominance and mating aggression, especially Amazons and macaws. Cockatoos can also be aggressive around breeding time. But, if you stop aggressive tendencies early, you can avoid serious injury to you and the bird. 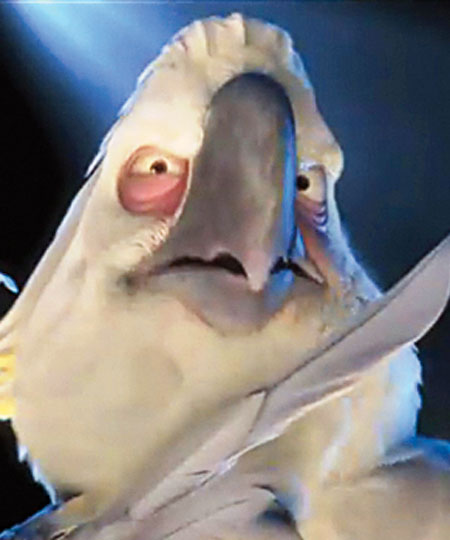 Within the flock, a bird chooses a mate and dominance is determined. This instinct does not leave the bird just because he now lives with people. Birds may choose one person as their substitute mate, and dominance problems can then occur. Watch for screaming, biting or lunging. You may also notice low crouching on a perch, raised wings, fluttering of wings and fanned-out tail feathers. These behaviors can be directed at any member of the family – even at the object of the bird's affection, as an attempt at protection. The bird feels that if he is aggressive toward his "mate" and forces the person into the nest box, harm will be prevented. Dominance and mating aggression is seen in both males and females.

If not treated and curtailed early, dominance aggression can worsen, especially around the time of sexual maturity. Frequently, people feel that the aggression was unprovoked, but be aware that birds perceive threats differently than people. You may not notice that a dog just walked into your yard, but the bird may see the dog through the window and feel fear.

Breeding season, late winter through summer, is the time when dominance behavior can become worse. Birds tend to protect their territory and their chosen "mate." Recognizing when the bird is becoming sexually active is key. The bird may attempt to lure the mate into a nest site, typically small confined spaces such as a closet or under large chairs or sofas. The bird may also preen the mate. Eventually, food may be regurgitated on the mate. Some people may even witness a mating dance: The male bird will squeal, begin fluffing his feathers, bobbing up and down and raising a leg. The female may also fan her tail and back onto the mate.

If dominance aggression is seen at any stage of the bird's life, it should be stopped immediately. Mating behavior should also be avoided. Aggression during the mating season can be quite serious and vicious.

Prevention: The Best Treatment
The best treatment is prevention. The bird must be trained to know that he is not the dominant member of the family flock, and all family members must establish dominance over the bird. 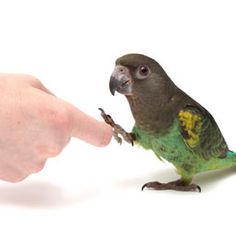 The easiest way to do this is to control the bird's movement. When you are removing him from his perch or cage, give the 'up' command. When the bird steps up to you, remove him from the cage and place him on the desired area. Do not allow the bird to leave the cage or perch on his own. Also, do not let him walk or fly free in the house until he understands that the family is dominant. Another thing to remember is that birds exert dominance by being at eye level or above, so don't place him on a perch at or above eye level. This means, NO SHOULDERS!!

Negative reinforcement can be used to inhibit aggression, but it must be used sparingly. Biting, screaming and lunging can be deterred by firmly saying "no" and then removing the bird from human companionship by replacing him in the cage. If this method does not work, the bird can be placed for a short time in a temporary cooling-off or time-out area like a sturdy box, small cage or travel carrier. After a short time, allow the bird to come out. If aggression occurs again, repeat the process. Be patient: Altering behavior in highly intelligent birds can be difficult.

Even though it may be tempting, never strike a bird. Significant injury can occur. Remember, too, that birds tend to become even more aggressive in response to physical reprimands.

Whenever aggressive behavior is noticed, stop it immediately. No matter how endearing mating behavior may seem at the time, birds should not be allowed to choose a human as a substitute mate. Reprimand and remove the bird from the area immediately if you notice courting behavior.