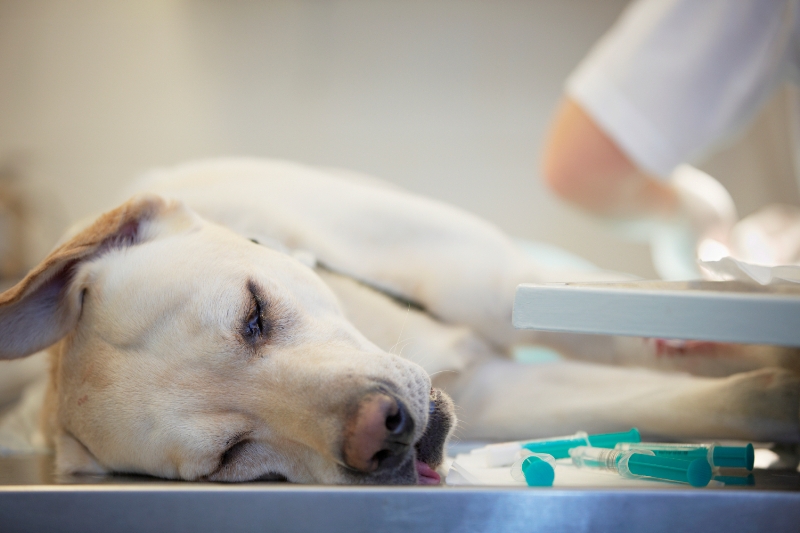 Definition of Heat Stroke
Heat stroke, also called non-pyrogenic hyperthermia, is an elevation of a dog’s core body temperature due to internal production of excess heat, exposure to high environmental temperatures or failure of its body to disseminate heat properly. The normal temperature range in dogs is between 100 and 102 degrees Fahrenheit. Dogs don’t tolerate high environmental temperatures well because they don’t sweat. Dogs dissipate body heat by panting, which helps them bring in cooler air from the outside. When external temperatures are higher than a dog’s body temperature, even panting can’t cool it down. Dogs with heat stroke become increasingly restless and uncomfortable as their temperature rises. They pant, have trouble breathing and become weak. Eventually, they lie down and slip into a coma. By this point, death is imminent unless the dog receives immediate aggressive medical attention. Unfortunately, many owners don’t notice the signs of heat stroke until it is too late.

Causes of Canine Heat Stroke
Heat stroke, also known as hyperthermia, is a true medical emergency. Dogs don’t tolerate high environmental temperatures as well as most other mammals do because dogs don’t sweat, except to a very small degree through their paw pads. Dogs can only dissipate body heat by panting, which helps them exchange hot air from their inside for cooler air from the outside. When external temperatures are close to or higher than a dog’s internal body temperature (normally between 101 and 102 degrees Fahrenheit), even panting won’t really help a dog cool down.
Heat stroke can be caused by anything that elevates the core body temperature. One cause of heat stroke in dogs is abnormal muscle fasciculations, which are involuntary spontaneous contractions of muscle fibers that generate a lot of body heat. Muscle fasciculations can be triggered by epilieptic seizures, low circulating levels of blood calcium (hypocalcemia), ingestion of mycotoxins (commonly found in rancid garbage) or ingestion of metaldehyde (the active ingredient in many pelleted slug and snail baits). More frequently, heat stroke happens when a dog is exposed to excessively high environmental temperatures for a prolonged period of time, or when a dog can’t disseminate heat from its body as well as it should. This is especially common in dogs that are overweight, dogs left in closed cars and those that have been exercised vigorously on a hot day. When a dog’s core body temperature rises, its regular responses to inflammation become impaired, and tissues and organs start to die.
Situations and conditions that contribute to heat stroke in dogs include:

Preventing Heat Stroke
Dog owners should familiarize themselves with the signs and causes of heatstroke, which is a potentially fatal condition. Dogs should always have free access to clean, fresh water and shade, especially in hot weather. They should never be left in a car with the windows closed or slightly ajar, even if the car is parked in the shade and the owner is only planning to be gone for a few minutes. Dogs with preexisting respiratory disease or breathing problems should be kept indoors with a floor fan or air conditioner running when the weather is hot and humid. No dog should be exercised strenuously in hot weather. Dogs should not be confined on concrete or asphalt without some way to get off of those heat-attracting surfaces. Dog beds, blankets, mats, wooden planking and grass all stay cooler than asphalt and cement and are kinder to a dog’s sensitive feet.

Initial Evaluation
Fortunately, heat stroke, also referred to as “hyperthermia,” is usually fairly easy to diagnose. Most dogs suffering from this condition will be taken to a veterinarian with a recent history of excessive panting, lethargy, weakness and/or collapse. The veterinarian will quickly take the dog’s rectal temperature, which in the case of heat stroke will be markedly elevated. This, together with the ambient outdoor temperature and the owner’s account of the dog’s recent activities, usually will be enough to make a definitive diagnosis of heat stroke.

Diagnostic Procedures
The dog’s presenting condition and its recent history of confinement, exertion or other exposure to high temperature extremes will strongly suggest that it is suffering from heat stroke. Nonetheless, the veterinarian still will conduct a quick but thorough physical examination, usually including a short neurological examination to assess the dog’s coordination and mental status. Sadly, dogs that have deteriorated to the point of being confused, disoriented, lethargic and recumbent, where they are lying down listlessly and are not able to get up, have a much worse prognosis than those that don’t have signs of neurological damage at the time they are brought to the veterinary hospital. Most veterinarians will take blood samples and submit them to a laboratory for a complete blood count (CBC) and a serum chemistry panel. The results of those routine blood tests will be abnormal in several areas in animals suffering from heat stroke.

Symptoms of Heat Stroke - What the Owner Sees
Most of the time, heat stroke happens to dogs on days that are exceptionally hot. Heat stroke is most common in very old dogs, and in very young puppies that are prone to over-exert themselves. Owners of dogs with heat stroke may recognize one or more of the following signs of this dangerous condition:

Treatment Goals
Heat stroke can kill a dog in a very short period of time, if the condition is not treated aggressively. The goals of treating heat stroke are to establish an open airway and provide oxygen to improve gas exchange and allow for additional dissipation of heat, cool the dog off, lower the dog’s body temperature to the normal range and identify and resolve the underlying cause of overheating. This may be as simple as removing the dog from the source of environmental heat. Unfortunately, this is not always easy to do.

Treatment Options
There are some things that owners can do to increase a dog’s chances of surviving heat stroke. Emergency measures to cool the dog must begin immediately. The dog should be taken out of any enclosed or hot environment and moved to an air-conditioned setting if possible. The owner should take the dog’s rectal temperature every 15 minutes or so, once she recognizes the signs of heat stroke and has moved the dog to a cool place. If the dog’s temperature is greater than 104 degrees Fahrenheit, the owner should cool it before trying to get it to a veterinarian. She should still call the closest veterinary clinic to alert them to the situation and ask what steps to take before and while transporting the dog to the hospital. The owner can aid cooling by wetting the dog with cool water from a garden hose or spray bottle, or by immersing it in a tub of cool water for a minute or two. The dog shouldnot be immersed in ice or ice-cold water. Cooling an overheated dog too quickly can cause its blood vessels to constrict (peripheral vasoconstriction), which will slow down heat dissipation. The damp dog can be placed in front of an electric fan, if one is available. Cold packs applied to the groin area and to the paw pads can accelerate the temperature drop; isopropyl (rubbing) alcohol can be applied to the foot pads, under the front armpits (axilla) and on the groin and flanks to enhance evaporative cooling.
Once the dog’s temperature has decreased to 103 degrees Fahrenheit or lower, the animal should be dried off, kept at normal room temperature and taken to a veterinarian. The medical team will take steps to normalize the dog’s core body temperature. Many animals will be hospitalized and receive intensive inpatient care for at least several days. Room temperature fluids and electrolytes may be administered intravenously at shock rates, depending upon the dog’s condition. Oxygen can be given either through a mask, in an oxygen cage or using a nasal catheter. In severe cases, where the dog is obtunded or comatose, the veterinarian may intubate it to ensure that it has an open airway and is receiving sufficient oxygen directly. The dog’s activity will be restricted, and normally it won’t be fed until its temperature and vital signs are stable.
A number of potentially dangerous medical conditions can occur after heat stroke, including heart abnormalities, kidney failure, liver failure, bone marrow problems, laryngeal edema, cerebral edema, disseminated intravascular coagulation (DIC), seizures and spontaneous bleeding, among others. These can happen from hours to days after the inciting event. There are no specific drugs to treat heat stroke. However, some medications can help manage the complications associated with the condition, which the dog’s owner can discuss with the veterinarian. Patients should be monitored around the clock during the first few days after the cooling-down process. Again, early recognition and aggressive treatment of heat stroke are critical to a successful outcome.