House-training, sometimes referred to as “potty-training,” a Chihuahua is no less challenging than house-training any other breed of dog. Even though he’s small, you don’t want your Chihuahua relieving himself indoors. Implementing a few breed-specific training tips will help the potty-training process go smoothly for everyone involved.

Take your Chihuahua outside every two hours, especially first thing in the morning, after eating and playing. After you remove him from his crate in the morning, he’ll urinate shortly after you set him down if he's untrained, so make sure you go outside immediately. Remember, puppies can only “hold it” for 1 hour per month of age, plus 1, during the daytime. 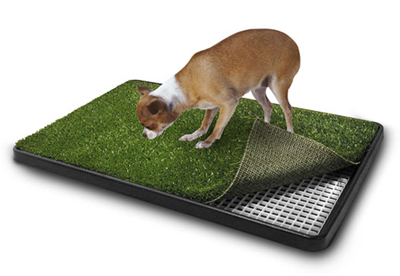 Limit his space. Install a baby gate so your Chihuahua has access to only one or two rooms in the house. Eliminate any gaps, holes or hiding spaces in his confined area so that you can properly monitor his behavior. A Chihuahua’s small size makes it easy to squeeze behind furniture and other hidden places to urinate or defecate. As he becomes more reliable, you can slowly expand his access to the house.

Watch his behavior closely for signs that he needs to relieve himself. Common signs include circling, sniffing and partial squatting. You must stop whatever you’re doing and take him outside immediately whenever you observe any of these behaviors. Preventing accidents before they occur is the most effective method of house training.

Praise and reward your Chihuahua for success instead of punishing him for mistakes. To do this, you must lavish enthusiastic praise and give a small treat after every single time your dog urinates or defecates outside. Every time you treat and praise, you’re reinforcing good potty-training habits.

Clap your hands to startle, not scare, your dog if you catch him relieving himself indoors. Immediately after clapping, you must calmly carry him outside to finish his business. Offer praise and treats when he relieves himself outdoors, even if he had an earlier accident inside. Focusing on good behavior through treats and rewards is more effective than reacting harshly to bad behavior.

Schedule your Chihuahua’s feeding, walks and playtime, and follow the schedule faithfully. A predictable schedule gives your dog a sense of security and helps him learn to regulate his bodily functions. Make the schedule realistic and specific to the needs of his breed. Chihuahuas, like other small dogs, have small bladders, which means that even when fully house-trained, your dog will never be able to hold it as long as a larger dog.

Place your Chihuahua inside his crate when you’re not home. Dogs dislike relieving themselves inside their living space. And although he dislikes doing so, you’re Chihuahua will urinate or defecate in his crate if you get off schedule or don’t take him outside often enough. The crate must be large enough for him to sit, stand, lie down and turn around in comfortably. Place a chew toy inside the crate with him so he doesn’t associate the experience with punishment.