This reader question struck a chord with me, because it's happened to me, and probably happened to a lot of you as well. Here's what he had to say. 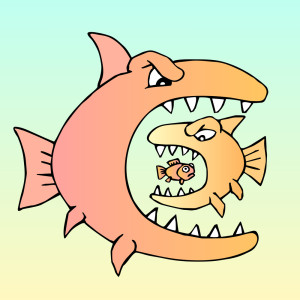 "I have two Bristlenose in a mixed tropical tank. I have noticed over the last few weeks that fish have been disappearing and attributed it to my Red Tail Sharks, but tonight found a very recent formerly healthy fish now dead. The fish was stashed up under the bridge that is the home of my adult male Bristlenose, and was already half eaten. I am now wondering if he is the culprit behind the other disappearances. Has anyone else noticed this behavior?"

Fish Are Opportunistic
I've seen the same theme quite often. A fish owner notices fish disappearing, then sees a normally peaceful fish feasting on the carcass of one of the missing fish. The immediate assumption is that the peaceful fish is actually a wolf in disguise. I have to admit I might have thought the same thing myself. In fact, years ago when this first happened to me, I did.

After seeing the corpse of my favorite fish being eaten, I was so incensed that I nearly executed the fish I thought was guilty. Thankfully logic got the better of me. Before doing anything rash I decided to consult someone wiser than I, and I learned a valuable lesson. He told me that seeing one fish eat another fish means very little, and that once a fish dies, other fish in the tank will quickly take advantage of the situation. Even a fish that is still alive, but very weak or sick, will be picked on by his tank mates.

Why does that happen? Fish, like other living creatures, are opportunistic. If food presents itself, in any form, they will eat it. Sure, that food may have been their best swimming buddy the day before, but today he's lunch. It's all part of that great circle of life. So how does a fish owner know who, or what, is the real killer? Sometimes it may be an obvious bully. Other times it could be a more peaceful fish, but it's also just as likely that it's not another fish at all. A series of deaths could be the result of a change in water conditions, an outbreak of an undetectable disease, or simply stress. The key is to carefully observe what is going on in the tank. This is particularly true whenever adding new fish to the tank, or anytime something changes in the aquarium. Stay on top of the habitat, and know what your water conditions are, to avoid invisible changes that can trigger a series of fish losses.

New Fish
New fish in a tank are under close scrutiny by the other fish. Even in a tank of peaceful fish, a pecking order exists. Territories have already been established, and all eyes are upon the newcomer to see which space he will choose. If the other fish become threatened in any way by the newcomer, quarrels my break out, even with normally peaceful fish. Any time you add a new fish to the tank, observe all the fish closely. If you see any signs of aggression, use the old standby trick of rearranging the decor. That alters the previous territories, and can settle things down. Make sure there are plenty of hiding places for everyone, even if it means adding more plants, rocks and other decor. If the aggression continues, you may have to remove either the aggressor, of the object of the attacks. 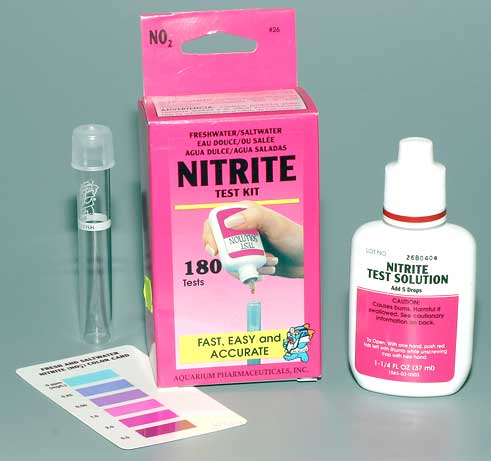 An invisible, but not uncommon problem that can occur in even a well established tank, is anammonia or nitrite spike. This is particularly true if new fish have been added, as that can tax the biological balance in the tank, resulting in a brief spike of ammonia, followed by elevated nitrite. The new fish are under stress already, due to being caught, bagged, transported, and introduced into an entirely new habitat. Consequently, they are more susceptible to succumbing to even a modest spike in ammonia or nitrite.
When water changes, filter cleaning, or other maintenance is performed, it's also possible to briefly alter the balance in the nitrogen cycle. Things will usually settle down quickly, but if any of the fish are already weak, they can succumb to the stress of the changes in water conditions. Then a chain reaction can occur. One fish dies, adding more organic toxins in the water, and another fish that is already stressed dies. The domino effect can appear to be a killer fish, when it's simply the result of weaker or older fish, falling victim to the effect of what is happening in the water. Tracking water parameters will help alert you to such changes, and let you know what the true "killer" really is.

Disease
Disease can also be the culprit behind a series of fish deaths. Not all diseases are obvious, which is why quarantining new fish is recommended. Perhaps that new fish you bought was already infected when you brought it home and put it in with your other fish. Between the stress of being moved and the disease it had, the fish went belly up the night after you brought it home. The next morning the other fish discovered the body, and quickly went to work feasting on their new found breakfast buffet. Now they are all infected as well. One by one, they become sick. Some of them may survive, others who are weaker may perish and be eaten by their tankmates. Are any of them killers? Nope, but if you find a pleco with a body stashed in his favorite hiding hole, you'd probably wonder.

That's why it's so important to quarantine your fish, and to stay on top of everything going on in the tank. Keep a journal so you know the normal behaviors of all your fish. Track the pH, ammonia, nitrite and temperature so you can see if something is changing in a not so good way. Step up your observations whenever you add new fish to the tank, or make a major change in the tank. If you know your tank, you aren't so likely to loss any fish. In the event you do lose fish, you are far more likely to know who or what the real killer is.

Rules for decorating your freshwater tank

You have your perfect tank, complete with all the bells and whistles of filtration. You have your water quality test kit ready. You have a list of fish you would like in your collection. So, how are you going to decorate your aquarium? Believe it or... more