Can a dog be a TV viewer?

Many people contend their dogs watch TV. There are even DVDs designed to entertain dogs.
These cinematic adventures are often filmed from the viewpoint of a dog, with the camera held about two feet from the ground. They include a variety of scenes, like running through fields with other dogs, racing up and down steps, going nose to nose with farm animals, chasing ducks, drinking from a bowl, taking a car ride and even a trip to the veterinarian’s office.
Before you run out and buy these videos for your dog to watch, there are a few things you should know about the relationship between dogs and TV—specifically, about the way a dog’s eyes work.

Dog’s-eye view
A dog has the eyes of a night hunter. It is important to be able to detect surrounding movements, since things that move are most likely to be the things the dog (or at least its wild cousins) can hunt and eat. For this reason, a dog’s eyes are specially designed to pick out motion, more so than human eyes.
At the level of a single cell in the eye, a moving target appears as a flicker, as it momentarily changes the light level. For this reason, behavioural researchers often use an individual’s ability to see a flickering target as a measure of the efficiency of motion perception. The researchers test how quickly they must flicker a target on and off until it looks the same as if it were continuously illuminated.
The average human does not see flickering above a speed of 55 cycles per second (i.e. 55 Hz) of dark and light. This is why, for example, a fluorescent lamp seems to be continuously glowing with a uniform light, even though it is actually flickering, at a rate of some 120 Hz. 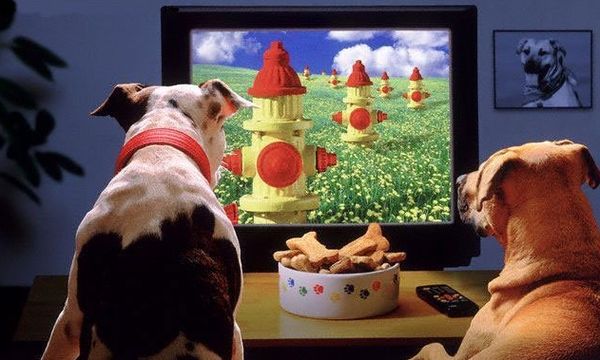 When researchers tested Beagles, however, they found the dogs on average were able to see flicker rates up to 75 Hz, which is 50 per cent faster than humans can resolve.
The fact dogs have better flicker perception than humans is consistent with the data that suggests they have better motion perception than humans. It can also help answer a common question: why do many dogs not seem interested in the images on TV, even when those images are designed specially for them?

Screen flicker
The image on a TV screen is redrawn at a rate of 60 Hz. To the best of a human’s resolution abilities, this flicker appears continuous. Changing images provide the illusion of movement, as characters on the screen advertise products or act out stories.
However, because many dogs can resolve flickers at higher speed, the TV screen probably still appears to them as a rapid flicker, making the images appear less real. Thus, many dogs do not direct much—if any—of their attention to what is happening on the TV screen.

Some dogs ignore the apparent flickering and will respond to interesting images on the TV screen. These dogs often ‘follow’ the images, even trying to look behind the screen to find out where something has gone after disappearing from their view.
However, since a dog’s dominant sense is its nose and objects on the screen have no scent, most TV-watching dogs will quickly lose interest in the images and wander off to pursue other activities.